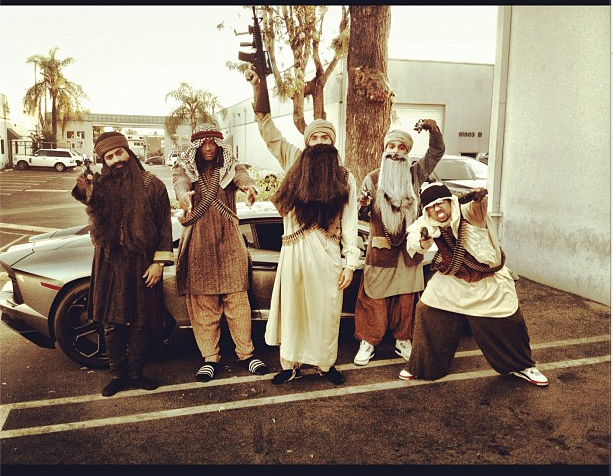 Hip Hop Star/domestic abuser/potential homosexual Chris Brown and his friends dressed up like Arab terrorists for Halloween. Which is fitting, because a picture of Chris Brown is what real terrorists look at when they need a way to justify their actions. Maybe next year he can dress up as Muammar Gaddafi’s corpse, or the Unabomber, or something else topical like that. Chris Brown grew up about 45 minutes away from me in a town called Tappahannok, VA, which for locals is known for having cheap gas, a middling seafood restaurant, and absolutely nothing interesting, including Chris Brown. I’d say it’s the kind of town where if you were driving through and you blinked, you’d miss it, but I can’t because that same seafood restaurant always lobbies to prevent the state from building a goddamned bypass around it. As a result, you’re forced to putter through at 25 mph taking in historical landmarks like Applebees, Wal Mart, and a combined KFC/Taco Bell. Chris Brown’s income probably accounts for 99.8% of Tappahannok’s tax revenue.

Speaking of revenue, financial security is the point at which you’re allowed to stop pretending you give a shit what other people think of you. For most of us, that doesn’t happen until we’re old and retired. Old people are ornery and cranky in part because they’re old, but also because they’re set. You have nothing to threaten them with, no way of jeopardizing their careers, income, or chances of having a family. In fact, if you show me a nice old person, I’ll show you someone who thirty years ago thought mutual funds were just a passing fad. If you’re old and want to call someone a “cuntwaffle”, go ahead. There are basically no consequences because you’re set. Fortunately for us, this usually doesn’t happen until our twilight years, so at worst we have to deal with it for an additional decade or two (less if you just send them to a home). Unfortunately for us, Chris Brown made more money than you will in your entire life by the time he was 20.

Whenever you reach that zenith of financial independence, at that point you’re basically no longer obligated to develop as a human being. If I won the lottery now, at 28, I could only be so much of an asshole because society has spent the last decade browbeating the asshole out of me. I’ve been conditioned to hold my tongue, be considerate of others, and weigh the future consequences of my actions. Chris Brown has had one of that, because one day when he was 16 years old he became an overnight millionaire, and that’s where his development stopped. That’s why when a journalist asks him about the time he bludgeoned another celebrity to within an inch of her life, he thinks you’re the asshole. That’s why, when adults try discourage teenage girls from supporting his music, he spouts gibberish on Twitter about people being “haters”. And that’s why, in 2012, he has no qualms dressing he and his buddies up as 50 Shades of Ethnic Stereotype. He may be in his 20’s and have more money than God, but he’s still a 16 year old asshole.

Error: Twitter did not respond. Please wait a few minutes and refresh this page.