Note: Because of the ridiculous amount of bullshit, Beach Body-sponsored sites out there that claim to offer “reviews” of their products, that’s about all you’ll get if you run a Google search for “P90X Review.” If you notice an abundance of images, links, and bolded text, that’s me exercising the tiny amount of SEO knowledge I have to hopefully get an actual review to rank.

I began the now-decade-old P90X home workout program sometime in February. Since it’s now sometime in May (because math), that means I’ve completed it. I was inspired to do it not because of slick marketing or outsized promises, but something altogether simpler – I wanted to get back into better shape, and I was getting tired of trying to figure out a routine or regimen. Having someone else tell me what to do seemed a lot easier, in that regard. Plus, I was familiar with it – I’d “acquired” the program several years prior, when I was living in Connecticut with no gym access. I figured a known entity was better than investing a bunch of money (or a couple of hours waiting on the torrent) on something unknown, so I went ahead and said “yep, I’m gonna do this.” I work from home with access to a high-quality (as these things go) apartment gym, so I had no excuse. I’ll say, I’m pretty happy with it – for the most part.

Before I get into the nuts and bolts, let’s first take a moment to consider what P90X “is,” or what it means. When it debuted in 2004, to my knowledge there was nothing so widely publicized on the market that actually worked. Prior to P90X, home workouts were (and continue to be) jokes – Jane Fonda, step aerobics, Richard Simmons et. all, they all gave in-home workout programs a bad name. But P90X, rather than going the tired “lose weight easy!” route, took a novel approach. It said “this program is hard, and in fact we’re going to sell it by playing up its difficulty.” Rather than coaching you along, Tony and the demonstrators actually participated in the workouts and sweat alongside you – the message being “if we can do this, you can too.” After that, things changed. “Bootcamp” workouts became commonplace in globo-gyms, CrossFit caught on, Tough Mudders were created and in general people decided that paying money to have someone else work them until they puked was a swell idea. Whether they actually completed it or not, P90X finally sold the gym-shy a program that genuinely offered them a path to better fitness. In fact (and particularly for folks who patronize places like Planet Fitness, where working out is actively discouraged), P90X may well be a plane above what most people do in the gym.

Those are not insignificant details. Here’s how I feel about the program overall (reviews of individual workouts to come in a later post).

First, the obvious – P90X “works.” That is, if you’re looking to get noticeably more fit than you already are, P90X will do that for you. I regret not taking a “before” photo (which the materials recommend), because the “after” would be night and day. I look noticeably fitter all over. I also appreciate the program’s honesty. For instance, they say explicitly that if you don’t follow the diet guidelines (which I didn’t really do), you will certainly be more fit, but you won’t necessarily look it. That’s an obtuse departure from other programs that promise results based on the workouts alone. It’s also pretty upfront about who exactly it’s for – if you’re not already in some kind of shape, you probably won’t get the maximum benefits from P90X. For a man, I’d say that you need to be able to do at least 20 pushups and maybe five pull-ups prior to the program to get much out of it. Otherwise, not only will most of the workouts be superfluous, but you’ll find yourself feeling defeated compared to the animals in the videos.

P90X also goes beyond paying lip service to the concept of “total body fitness.” There isn’t a body part or discipline that gets ignored. Even though there’s technically “no cardio” (although really, the whole program is cardio), your heart and lungs will take a beating. Upper, middle and lower body, it’s all in there. Nothing is overlooked, though some parts are paid more attention than others. Also worth noting are the great pains taken to 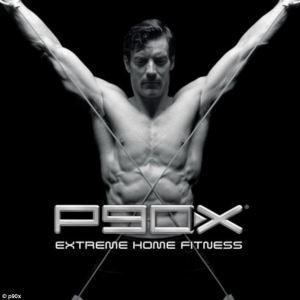 really gear the workouts to the gym-shy (though this is also one of its shortcomings). In some cases, you’ll really be amazed at what you can accomplish without gym equipment or even weights. However, if you’re someone looking to get into more traditional weightlifting, I think this is a great foundation. Due to the emphasis on bodyweight and compound movements, you’ll come out better-prepared for exercises like squats, deadlifts and bench presses, and you’ll have the stabilizing strength to do them properly.

In general I look better, I’m stronger (to a degree) and my cardio is better – I couldn’t really be happier with the results (nor could my wife). However…

It’s hard to call anything about this program a “con,” but it has its weaknesses. For one thing, there’s really nothing inherently unique about it – sure, you get results, but that’s true of any by-God exercise to which you devote 6+ hours per week. It’s also not something you want to do if you have a very specific “look,” or goal, in mind. If you want a “lean, athletic” look, or humongous muscles, you won’t get that because the program is very total-body focused. You’ll also learn that you can’t fight genetics – as much as I’d like that “Brad Pitt in Fight Club” look, my body’s gonna do what it’s gonna do, which is pack on muscle. Outside of an ultra-specific diet and exercise regimen, I’ll never have a “swimmer’s physique.” That’s fine with me, but don’t go into it hoping to become something you’re not. Tony does preach “8-10 reps for size, 12-15 reps for lean,” which, besides being erroneous advice (if anything, the opposite is true), is rendered moot by the sheer number of reps you’ll end up doing per muscle group. Also, don’t buy into the “muscle confusion” hype in the marketing collateral. Most experts say it takes at least 10 weeks before your body has exhausted its options for neurological improvement and the recruitment of other muscle groups to assist with an exercise and resorts to building muscle; the entire program lasts a total of 12 weeks. I mean, I definitely packed on substantial muscle mass, but I’m also a fast gainer.

Maybe most crucially, don’t do this program if you expect to gain a lot of by-God strength – it’s just not designed for it. Though mass and strength are to a degree inextricable, P90X definitely leans towards the former. It’s in essence circuit training, albeit an incredibly effective variety. As I mentioned, there’s no getting around doing a huge number of reps per muscle group, and due to the home-friendly (more on that in a bit) nature of the program, there isn’t a lot of room to modify things into the high-weight, low-rep range. Chest is probably the most notable offender: For whatever reason, the only dedicated chest work comes in the form of pushups, which are limited to your bodyweight unless you add a weighted vest or something. Obviously your reps will increase over time, but that’s a formula for size, not so much strength. Again, they’re not mutually exclusive (I can now stack the bullshit Nautilus chest machine in my gym with zero effort), but if you can bench 300+ now, don’t expect this to help much. If anything, you might lose a little on your max.

While it may well be the most honestly effective in-home workout program, you’re still going to have to make sacrifices in terms of money and space. In selling the program, they claim you only need a pull-up bar and some dumbbells (or bands). That’s technically true and sounds good, but consider the pull-up bar. Most people aren’t going to set up a dedicated rack with a bar on it, so that means buying one of those doorframe models. That’s ok, but how many people have a strong doorjamb that also faces the TV? Not many. Regarding the weights, saying you need “some dumbbells” is a little disingenuous. I’m fortunate enough to be able to workout in the middle of the day when my apartment gym is empty, and I

This is comically unlikely to happen to you

honestly need the entire suite of weights, from 10 lbs to 60 lbs (and I could even use more, if they had it). Most men will, and getting that wide of a range of weight in your home is an incredibly expensive endeavor, even if you buy those adjustable dumbbells. Each and every video has someone showing you how to use resistance bands for each exercise, but I can’t help but doubt how effective those actually are (especially for men). Doing lat pulldowns on a band is no substitute for pull-ups, no matter how you slice it.

Finally, the program is outright exhausting, and I don’t mean the workouts themselves (though they are). While they sort of nod in the direction of variance, there are only so many workouts in the program, all of them ball-bustingly hard. While things change a lot from phase one to phase two, you’re always required to do “Plyo,” “Legs and Back,” “Yoga X,” “Ab Ripper X” and “Kenpo X” weekly for all 10 “active” weeks. Yoga is too long (but tolerable), and Kenpo X is useless but benign, but Plyo, Ab Ripper and Legs and Back are fucking murder. Combined, they’re the only ways you work your legs and abs, and it’s easy to get really, really sick of them. I “acquired” the new P90X3 program for my wife, and it was a Godsend. I was able to sub in workouts for Plyo, Ab Ripper, Yoga and Kenpo, leaving Legs and Back as the only repeating one. If you didn’t do that, though, I could see it being really hard to stick with the program. It’s such a problem that if you go to Beach Body’s website, they have schedules for using “Insanity” as substitutes for the P90X cardio routines. I also take issue with some of the individual workouts’ makeup – it doesn’t make sense to me, for instance, to work chest, shoulders and triceps in one sitting (I can work triceps without my chest, but not vice versa).

So that’s kind of my overview of the program. To be sure, don’t take the “cons” as reasons not to do P90X, unless you have very specific goals. It’s fantastic, and offers a genuine path to better fitness without the hassle of a gym contract. In the next entries, I’ll get into the specific workouts themselves so you can get a better sense of what you’re in for.