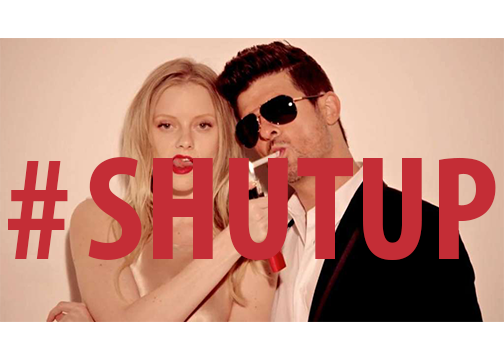 Unless you are dead and/or def, you’ve probably heard Robin #Thicke’s song “Blurred Lines.” If you are a sane, well-adjusted person, you agree that it’s the greatest gift to music since the invention of the major chord. But for some people, getting offended and complaining is as intoxicating as any drug. Because these people hate all things that are good, they’ve set their sites on the best song since the Star Spangled Banner. The reason? It promotes “rape culture.”

“Has anyone heard Robin Thicke’s new rape song?” blogger Lisa Huyne wrote in a post in April. “Basically, the majority of the song…has the R&B singer murmuring ‘I know you want it’ over and over into a girl’s ear. Call me a cynic, but that phrase does not exactly encompass the notion of consent in sexual activity … Seriously, this song is disgusting

Oh for Chrissakes, go comb your armpit hair elsewhere and shut up. Just because you took a Womyn’s Studies class one time, that doesn’t mean you’re qualified to say what is and what isn’t a “rape song.” Her main issue with it is that #Thicke repeats the phrase “I know you want it” over and over. Ok, that could be considered a little rape-y, in the context of, I don’t know, an actual rape situation. But have you ever had consensual sex? By definition, both parties “want it,” and if you’re having the sex you know, in fact, that the other person “wants it.”

If anything, the idea of taking offense to something like “I know you want it” and dismissing it as rape undermines women. What if she does want it? Are you trying to say that women aren’t capable of wanting sex, so that when a man declares he “knows you want it,” it can only be an unwelcome advance? Sure, contextually that kind of thing could be negative, but this is just about a man trying to have some swagger, some bravado. I wasn’t aware that wasn’t allowed anymore.

DON’T WORRY, the video (which is fantastic and features beautiful women in various stages of undress) is under plenty of scrutiny too. I know, the gall of someone to hire women who look sexy for a living to look sexy in a music video. For his part, this is what #Thicke had to say about it:

We tried to do everything that was taboo. Bestiality, drug injections, and everything that is completely derogatory towards women. Because all three of us are happily married with children, we were like, “We’re the perfect guys to make fun of this.”

People say, “Hey, do you think this is degrading to women?” I’m like, “Of course it is. What a pleasure it is to degrade a woman. I’ve never gotten to do that before. I’ve always respected women.”

Hmm. That sounds like an answer from a man who a) knows what’s up and understands the purpose of the thing he created and b) is probably sick and tired of people asking him if his music video is “rapey.” Of course it is, he made it that way on purpose. It’s not as though someone caught them with a hidden camera and leaked it to the web. It doesn’t matter, though, because we live in a world where art is dead, primarily because we’re all incapable of deciding what things we take seriously. Like, listen to this lady:

“[T]he fact that they are all married with kids does not make it OK for him to say these things or depict them in a song. Because songs like this are dangerous,” wrote blogger Liz Terry earlier this month.

Yes, this song is super dangerous. Here’s a tip – if your son or daughter grows up to be a rapist, it’s not because he saw and heard “Blurred Lines” by Robin #Thicke. It’s because they have a screw loose, or you’re a lousy parent, or both. If it’s too inconvenient for you to have a conversation with your child wherein you explain that things like music videos and video games are not real and should not be taken seriously, then you deserve for your child to grow up to become a rapist. You know the easiest way to take something like a music video and turn it into a big deal that can influence children? You incessantly blog and talk about how it’s a big deal that can influence children.

In breaking news, people are still idiots who get great big boners from complaining about otherwise innocuous things.